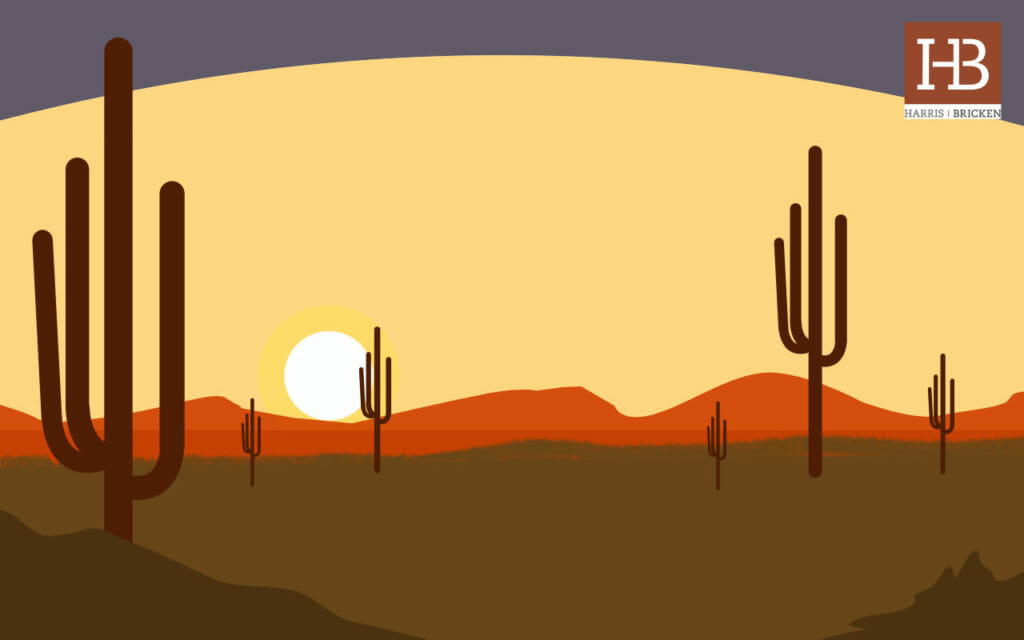 This November 2020 election, cannabis legalization initiatives will appear on the ballots of five states: Arizona, Mississippi, Montana, New Jersey and South Dakota. Every Sunday until November 3, Canna Law Blog will publish a post centered on one of these state ballot initiatives, and the current laws surrounding cannabis in that state. Today is the first post, in which we discuss the ballot initiative in Arizona, Proposition 203, or the Marijuana Legalization Initiative.

In 2010, Arizona legalized medical cannabis through the passage of the ballot measure Proposition 203, known as the Arizona Medical Marijuana Initiative. The enacting statute, known as the Arizona Medical Marijuana Act (AMMA), allows Arizona residents with medical conditions to possess certain amounts of cannabis for medical use, with qualified patients and caregivers allowed to purchase cannabis from specific clinics. This law charged the Arizona Department of Health Services (ADHS) with regulating the sale and use of medical cannabis. Additionally, the AMMA protects patients who use medical cannabis from state arrest and prosecution as well as discrimination from employers.

The AMMA was controversial, barely scraping into law with 50.1% of the vote. Many political action groups and politicians lobbied against and opposed the ballot measure, including then-Governor of Arizona Jan Brewer (R).

Since the passage of the law, the ADHS and the Arizona State Congress have limited the scope of the AMMA. In March of 2011, the ADHS laid out licensing regulations for patients as well as rules about which medical conditions qualified a patient for medical cannabis use, listing only 14 qualifying medical conditions in total. According to the Washington Post, only around 20,000 Arizona residents qualified for medical cannabis use under these regulations. Additionally, the ADHS regulations prohibited qualified patients from smoking cannabis in public spaces.

In 2012, the Arizona State Congress signed a bill into law which prohibited the use or possession of medical cannabis on any college campus in Arizona. In 2018, however, the Arizona Supreme Court, struck down this law as unconstitutional on the grounds that the legislature could not prove that criminalizing medical cannabis on college campuses would preserve federal funding.

This November 2020, Arizonians will vote on the Marijuana Legalization Initiative, or Proposition 207, a ballot initiative which would legalize cannabis for recreational use and possession. If passed, individuals in Arizona could legally grow up to six cannabis plants on or in their residences. The bill would not, however, allow residents to grow or use cannabis in public view.

The law seeks to address historical inequities surrounding cannabis laws. Specifically, the law would create a Social Equity Owner Program to provide licenses to entities with owners “from communities disproportionately impacted by the enforcement of previous marijuana laws.” Additionally, the law would allow people to petition for the expungement of certain cannabis-related convictions from their record.

The Marijuana Legalization Initiative would institute a 16% tax on the sale of cannabis on top of existing Arizona sales taxes. If passed, the law would also give local governments authority, such as the ability to ban cannabis facilities and control over elements of zoning and licensing.

The prospects for passage of Proposition 207 are uncertain. In 2016, Arizona failed to pass a bill that would have legalized cannabis, with 51% of voters opposed. Polls suggest that the majority of Arizonians support the 2020 Marijuana Legalization Initiative. According to a June poll, 62% of voters expressed that they would support the measure. However, the most recent poll in September found the margin to be a lot closer, with 51% polled in favor and 41% against, and the margin shrinking even further when considering the likelihood of voter turnout (but with support still in the majority). Therefore, it seems likely this bill will pass but it may come down to which Arizonians turn out to vote.