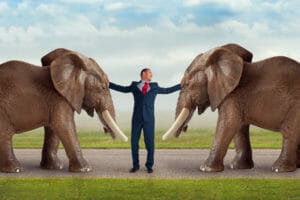 A few weeks ago, I wrote a post called “Cannabis Business Litigation: What’s the Point of a Demand Letter?” If you didn’t read that post, the gist is that demand letters can sometimes spur early settlement talks or the correction of improper conduct and avoid costly litigation or arbitration. Today, I want to talk about another possible way to settle cannabis disputes: mediation.

Mediation is a process by which parties sit down together, generally with a neutral third party to and try to resolve a dispute. The third party is often a retired judge or lawyer, but in some cases, she or he may be the actual judge or arbitrator presiding over a case.

Mediation can beneficial for cannabis disputes for a host of reasons. Mediation is not necessarily a formal process. Parties to a contract often agree to pre-litigation or pre-arbitration mediation. It can be before a mediation forum, but that’s not required.

Mediation is also generally confidential. Where I practice in California, there is a statutory mediation privilege that generally prevents parties from using anything that is communicated during mediation to be used outside of mediation. That gives parties to the mediation a lot of leeway to discuss potential settlement openly without the need to worry that what they say will be used against them if the mediation fails. Mediation confidentiality is also generally broader than the normal settlement privilege.

While mediation can be expensive (each side will have to pay its own lawyer’s fees plus split the costs of the mediator, which are usually at least a few thousand dollars but can be $10,000 or more in some cases), if mediation is done early enough in a dispute and results in settlement, it can save hundreds of thousands of legal fees and the risk of loss at trial. The value of mediation in these cases far exceeds costs.

But as any litigator will tell you, there can be some drawbacks to mediation. Outside of contract-mandated mediation, mediation in an active litigation or arbitration matter is all about the timing. There can be a fear among lawyers to propose early mediation who want to avoid losing leverage. Some lawyers are of the view that if one side proposes mediation, it shows that they believe they have a weak case.

In reality, sometimes disputes just are not ready to be mediated. In cases where a large amount of discovery is necessary, it may not make sense to try to mediate at the outset. A party may want to wait until they gather sufficient evidence to feel confident going into mediation that they have enough to negotiate a favorable settlement. At the beginning of a case, neither party may be ready yet to mediate. This can be especially true in cannabis litigation involving oral or handshake contracts, because it takes substantial written and deposition discovery for the facts of the case to crystallize.

That said, when it comes to cannabis, early mediation has its benefits regardless of the factual issues in a case. Getting into a confidential forum right off the bat and avoiding public and drawn-out disputes is good for just about any cannabis business.

The bottom line is that mediation can be an extremely powerful tool in any cannabis dispute, but the timing of mediation, strategies for negotiation, and even who proposes mediation depend greatly on the facts and circumstances of each case.