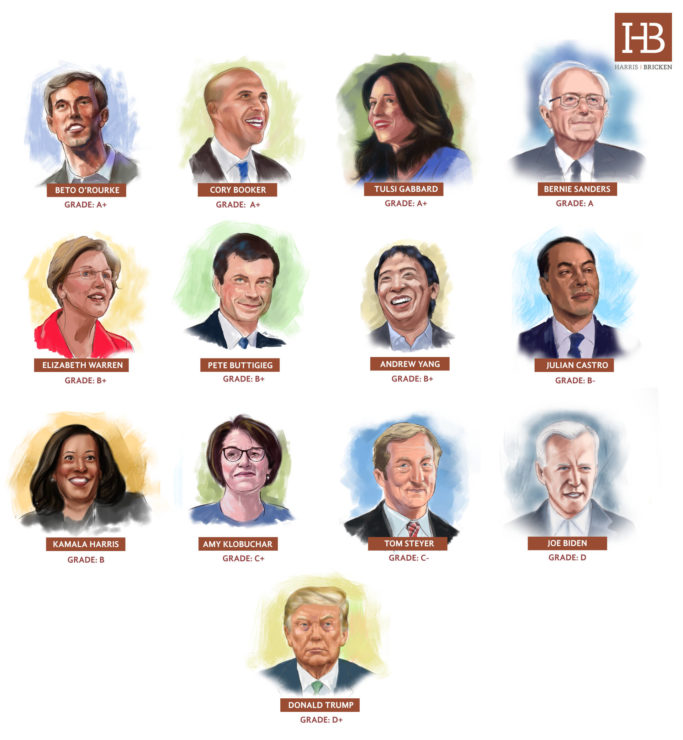 In a recent 13-part series, we reviewed the stance of each of the 2020 presidential candidates’ on marijuana, and we assigned each candidate a letter grade corresponding with our analysis. Our grading criteria is as follows:

Below is a final summary of the candidates, in order of ranking.

Conclusion: From the beginning of his career in the Senate, Booker has dedicated substantial effort towards legislation focused on criminal justice reform, including the legalization of marijuana. He is not only an outspoken advocate of legalization but he has taken the lead on legislation to reform marijuana laws. When it comes to cannabis, there is no better presidential candidate than Cory Booker.

Conclusion: We award Gabbard an A+ grade for making marijuana legalization central to her platform and for her extensive record of legislative action on marijuana. Gabbard has clearly demonstrated her commitment to legalizing marijuana and we believe that she would see the job through if elected president.

Conclusion: O’Rourke receives an “A+” grade because he has been dedicated to legalizing marijuana and ending the War on Drugs since long before he ran for president. His call for a discussion of marijuana in 2009 clearly shows O’Rourke is not simply pro-legalization to win over voters.

O’Rourke genuinely believes in legalizing marijuana because he saw the consequences of its prohibition in his hometown of El Paso. We are confident that a President O’Rourke would fight hard to legalize cannabis and for that we give him an A+.

Conclusion: Sanders receives an “A” grade based on his nearly flawless support for cannabis for the last 20 years. His record of pro-legalization legislation is remarkable and cannabis legalization is a central part of his platform as a presidential candidate. Though Sanders supported a couple bills early in his career that were inconsistent with his criminal justice platform, his two decades of pro-legalization legislation and rhetoric demonstrate his dedication to cannabis legalization and convince us that a Sanders presidency would be great for cannabis. His very recent release of a progressive and detailed national legalization plan (which happened after we initially assessed his views), should probably vault him into A+ status.

Conclusion: Warren receives an “A-” grade on cannabis. She obviously wants to come across as a longtime advocate for marijuana reform. Despite her claims, however, Warren did not consistently support legalization of marijuana before 2016. Fortunately, Warren’s recent legislative action surrounding marijuana is promising and Warren intends to legalize marijuana by executive order if elected president.

Conclusion: Buttigieg receives a “B+” grade. Over the course of his short and mostly innocuous political career, Buttigieg has not accumulated enough of a record on marijuana to determine the depth of his convictions regarding cannabis, but he has consistently stood for legalization since announcing his presidential candidacy. We do downgrade him for not actively addressing legalization on social media, which seems to indicate that this issue is not a high priority for him. In his favor, Buttigieg has openly supported legalization and his plan to address the War on Drugs and its aftermath is quite comprehensive.

Conclusion: Yang receives a “B+” grade. Yang’s rhetoric is promising, but he lacks a legislative record on marijuana reform and criminal justice reform is not one of his “Three Big Policies.” His views on cannabis are good, but it is not clear how important they are to him. As president, Yang would likely be an advocate for legalizing marijuana, but it is unclear whether he is dedicated enough to make it happen.

Conclusion: Julián Castro receives a “B-” grade because his support for the legalization of marijuana is not an important part of his platform and because he has no legislative record on the issue. Castro has openly supported legalizing marijuana on his social media, but he does not mention marijuana on his website and only recently did he wholeheartedly express support for legalization at the federal level. He also omits key aspects of criminal justice reform from his platform. Overall, as president we think Castro would support legalizing marijuana, but we question his enthusiasm on this issue.

Conclusion: Harris receives a “B-” grade. As a presidential candidate, Harris is now outspoken in her support of legalizing marijuana as part of her criminal justice reform platform. Additionally, her recent sponsorship of the Marijuana Justice Act of 2019 demonstrates her willingness to take legislative action.

However, Harris’ less-than-stellar history on cannabis should make people wonder whether she really believes in legalization and how deeply. To put it bluntly, she may be fine on cannabis right now, but her history is cause for concern. Her past opposition to legalization as an attorney followed by inaction during the early part of her career as senator does not and should not inspire confidence in Harris as an advocate for legalization.

Conclusion: Conclusion: Klobuchar receives a “C+” grade because of her less-than-stellar history on cannabis and for her silence on legalization. Though Klobuchar stated support for legalizing marijuana, she obviously wants to distance herself from the issue by excluding any mention of marijuana from her social media and website.

Klobuchar’s legislative history is also disappointing. Before 2018, the senator did not sponsor any bills related to marijuana. She has recently signed on to marijuana-related bills, but she is the only Democratic presidential candidate in the senate who chose not to co-sponsor The Marijuana Justice Act.

Her pro-legalization stance, communicated in a single “statement” sent to The Washington Post, is not convincing. She comes across as having softened on legalization more for political reasons than out of any true commitment and she has done very little to demonstrate that she really wants to legalize marijuana.

Conclusion: We give Steyer a “C-” because he has only directly addressed his views on marijuana once. He also does not address criminal justice reform on his website or in his rhetoric.

Conclusion: Biden receives a “D” grade for his views on cannabis because he both fails to recognize or acknowledge its medicinal uses and because he is the only prominent Democratic Party presidential candidate who does not support cannabis legalization. The only thing Biden has going for him is a stated desire for criminal justice reform, which saves him from a failing grade.

Conclusion: Donald Trump receives a “D” grade because his administration rescinded the Cole memo and called for a crackdown on legalization states and because he broke his campaign promise to let states decide whether or not to legalize. More generally, his promise to let states choose whether to legalize would still leave marijuana illegal at the federal level. His inconsistency on cannabis is the biggest issue. He will say one thing and then do something completely different. His actions often do not match his words.

In a recent 13-part series, we reviewed the stance of each of the 2020 presidential candidates’ on marijuana, and we assigned each candidate a letter grade corresponding with our analysis. Our grading criteria is as follows: Current stance on marijuana: What have they recently said about marijuana legislation? When did they adopt this stance? We…Read More