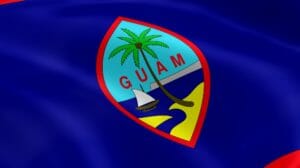 This federal and state interplay has resulted in many legislative and regulatory changes at the state level. Indeed, most states have introduced (and adopted) bills that would authorize the commercial production of hemp within their borders. A smaller but growing number of states also regulate the sale of products derived from hemp. Our attorneys track these developments in real time on behalf of multiple clients, and we provide those clients with a 50-state matrix showing “green-”, “yellow-” and “red-” light states with respect to production, distribution and sale of hemp and CBD products.

In light of these legislative changes, we are presenting a 50-state series analyzing how each jurisdiction treats hemp-derived cannabidiol (“Hemp CBD”). Today we go beyond the 50 states once more, to where America’s day begins: the territory of Guam.

Guam has not submitted a state hemp plan to the USDA, and there are no indications that it plans to do so.

As to the legal situation regarding Hemp CBD in Guam, there have been mixed signals from officials. Consider the confusion that followed last summer after the Guam Customs & Quarantine Agency (GCQA) seized unspecified CBD products. (One of the quirks of Guam’s political status is that it is not part of the customs territory of the United States.) According to GCQA’s director, the seized products had tested positive for THC, but the lack of a cannabis laboratory on Guam had prevented GCQA from determining if the THC content was below 0.3 percent.

On July 7, Guam’s congressional delegate, Michael F.Q. San Nicolas, decried the seizures as lacking due process. Previously, San Nicolas had been informed by GCQA’s director that the seizures were made pursuant to an order by the Department of Public Health and Social Services (DPHSS). However, DPHSS’ director in turn denied that any such order had been issued by the department. According to San Nicolas, the statements by GCQA and DPHSS are “blatantly inconsistent, and thus appear to be a clear area of concern.”

‘We realize the 2018 Farm Bill and recent local law have given some the impression that CBD has been completely decriminalized and that CBD sales are now legal everywhere and by everyone,’ Camacho said. ‘But decriminalization does not mean no regulation.’

CBD is still considered a drug, and the Federal Drug Association [sic] has authority to regulate products containing it. Products where CBD has been added aren’t approved for interstate commerce, according to Camacho.

‘Our office will work with our clients — local government agencies — on the establishment and consistent enforcement of regulations for CBD products,’” he said. ‘When these products are available, we want them to be accurately labeled and safe for consumers.’

The AG’s concerns clearly went beyond ensuring that the products met the THC threshold. “Our office is concerned about consumer safety,” he said, “making sure that products inform consumers about what they contain, and what those products do.” Yet despite AG Camacho’s admonitions, by the end of that week, Guam’s governor, Lou Leon Guerrero, had instructed GCQA to release the seized CBD products, citing the absence of clear guidelines from the FDA. Gov. Leon Guerrero did raise the possibility of further disruption as Guam works “through the complex and changing regulations governing CBD.”

The governor also expressed her own concerns regarding product safety.

The governor’s office said DPHSS ‘will ensure that CBD products, both edible and not, are not marketed for use in the diagnosis, cure, mitigation, treatment, or prevention of disease and/or for the intent of affecting the structure or any function of the body.’

‘Consumers should be aware that only one CBD prescription drug has been approved by the FDA. No other CBD products have been approved by any local or federal regulatory body for safe consumption,’ the governor’s office said. ‘It is a staple responsibility of DPHSS to ensure that the general public is not impermissibly swayed to consume or use products based on unsubstantiated promises.’

Despite some grumbles from law enforcement, it appears the Guam authorities have laid off CBD since the governor’s decision. In any case, with Guam now working on drafting rules for implementing its recreational cannabis rules (COVID-19 delays aside), it is hard to imagine too much controversy regarding the overall legality of Hemp CBD in the future. That said, there could still be considerable back-and-forth regarding specific products such as edibles and cosmetics, especially given the clear concerns held by local officials regarding consumer safety and health issues.

We’ll continue to monitor all things hemp in Guam and elsewhere, and step back into the regular order as we cover Virginia next week. For previous coverage in this series, check out the links below: