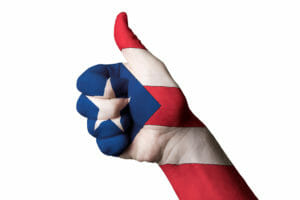 Charlie Delgado Altieri, the main opposition candidate for governor of Puerto Rico, has suggested a new tax be imposed on hemp and medical cannabis to help foot the bill for government pensions, amidst a long-running fiscal crisis in the U.S. territory.

According to Delgado, such a levy would be justified, given the cannabis industry’s “billions of dollars” in earnings. Delgado says cannabis industry representatives with whom he has met are open to the idea in principle, with some of them having presented counterproposals. It is possible this spirit of compromise is due in part to Delgado’s indications he would take steps to allow recreational cannabis use in Puerto Rico. As they say in Puerto Rico, hay que dar del ala para comer de la pechuga: You have to give up some of the wing to get some of the breast.

Delgado does not appear to be an ardent supporter of legalization, but an administration led by him might be Puerto Rico’s best shot at recreational cannabis legalization. The fracture between Delgado’s Popular Democratic Party (PPD) and the governing New Progressive Party (PNP) is primarily over political status preferences (continuation of the territorial status quo vs. statehood). Nonetheless, the partisan split has some elements of a left-right divide, along both fiscal and social lines.

In general terms, the PPD feels more comfortable embracing social liberal causes, such as LGBT rights. It was the last popular governor, Alejandro García Padilla, that got the legalization ball rolling, issuing an executive order that authorized medical cannabis use. By contrast, the governing New Progressive Party (PNP) has important social conservative constituencies (although some of its most important leaders align with Democrats at the national level, including 2020 gubernatorial candidate Pedro Pierluisi). And to its credit, it was a PNP administration that passed legislation enshrining medical cannabis legalization, a couple of years after García Padilla’s executive order.

However, recreational cannabis appears to be a bridge too far for some of the party faithful.

What exists of an economic policy divide is also manifesting itself in the debate over Delgado’s cannabis proposal. PNP legislators have decried the plan, suggesting taxes were the PPD’s “solution to everything.” That may be political hyperbole, but Delgado’s views on cannabis are clearly shaped by its potential to bring additional government revenues. Discussing possible legalization of recreational cannabis, Delgado stressed any proposal must enrich the public purse.

While any steps toward further legalization would be welcomed, Delgado should view the cannabis industry as a driver of growth, not a government piggy bank. The success of the industry will result in greater tax revenues, but cannabis can and should be about much more for Puerto Rico. If the government just stands by the till, waiting for its cut, instead of giving the industry room to grow, it will hinder its potential for job creation.

As for the PNP, concern for hemp and medical cannabis consumer as a taxpayer is laudable—but if its leaders really care about improving the lot of Puerto Ricans, they should stand firmly behind recreational cannabis legalization and the economic boost it would surely bring about. Moreover, a well-regulated cannabis industry would emulate what is happening in many U.S. states—something that should resonate with a party that advocates for statehood.