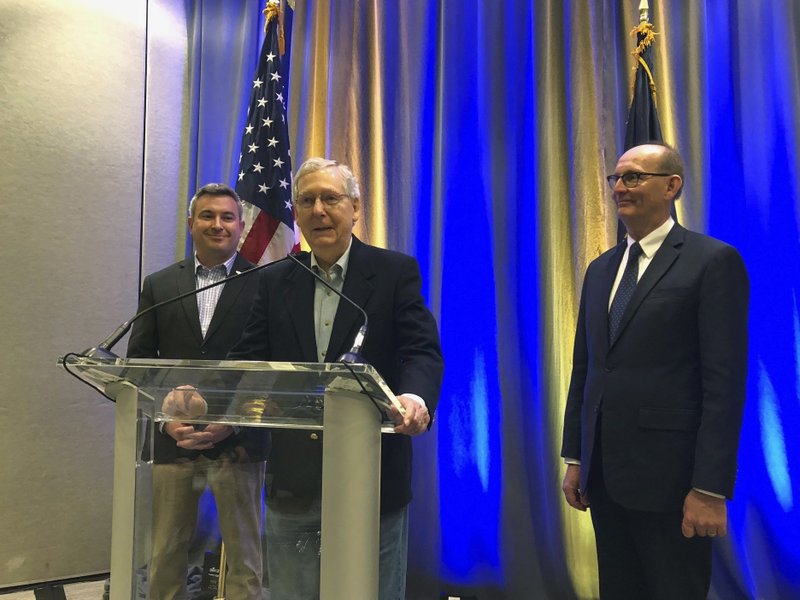 That includes safeguarding hemp shipments stopped by police who can’t tell whether they intercepted a legal crop or marijuana.

“Some glitches remain to be worked out, and some of it may require legislation,” McConnell told reporters after a hemp forum in Louisville, his hometown.

Using a football analogy, the Republican Senate leader said hemp supporters have reached the “red zone” in restoring the historic crop to mainstream American agriculture. He added: “I’m prepared to do my job … all the way into the end zone if it requires additional legislation.”

Since hemp’s legalization, some truckers with interstate shipments have been stopped and sometimes arrested. The only way to distinguish hemp from marijuana is by measuring their tetrahydrocannabinol, or THC, and officers don’t have the testing technology to do so on the spot. Marijuana, illegal under federal law, has enough THC to get users high. Hemp has almost none — 0.3 percent or less under U.S. government standards.

Kentucky and Oregon are big hemp producers, and much of what they grow is processed in Colorado. Companies that transport hemp often drive through Oklahoma and Idaho, where some arrests have occurred.

McConnell, who led the push in Congress to legalize hemp last year, said Monday that regulations might be sufficient to help some aspects of the hemp business.

“That might be an area where USDA can work together with other federal agencies to not only help them understand hemp, (but) look for testing protocols that might be able to be used on the road to be able to differentiate between hemp and other products that aren’t legal,” he said.

Kentucky Agriculture Commissioner Ryan Quarles said ensuring unimpeded hemp shipment requires communicating with officials in other states “about what hemp is and what hemp is not.”

Other concerns have included making sure the fledgling industry gets the financial backing it needs to grow.

McConnell recently teamed with Sen. Ron Wyden, an Oregon Democrat, in seeking to ease concerns about credit availability and other financial services for hemp farmers and businesses. They urged federal financial regulatory agencies to make it clear that hemp is legal and to issue “guidance” to institutions under their jurisdictions to ease concerns.

McConnell orchestrated successful efforts last year to attach hemp legalization language to the new federal farm bill. The provision removed hemp from the list of federally controlled substances and treats the low-THC version of the cannabis plant like any other agricultural crop.

Now, the USDA is crafting rules for a nationwide hemp program. The Kentucky forum was part of the effort to gather input. The goal is to have the program in place for the 2020 crop season, Ibach said. The work includes developing a crop insurance program for hemp growers.

“My goal is to get this product out as quick as we can, but yet it’s got to be right,” USDA Risk Management Agency Administrator Martin Barbre told reporters.

Deeply rooted in Kentucky’s past, hemp was historically used for rope but has many other uses, including clothing and mulch from the fiber; hemp milk and cooking oil from the seeds; and soap and lotions. Other uses include building materials, animal bedding and biofuels. Hemp-derived CBDs are touted by many as a health aid.

While hemp’s commercialization is still in its infancy, Quarles said he hopes Kentucky hemp someday becomes as recognizable as Kentucky bourbon and horses.

Nearly 1,000 farmers will grow hemp in Kentucky this year and more than 120 companies in the bluegrass state are processing the material, Quarles said.

back to resources
PrevPreviousCannabinoids, stress and depression
NextMitch McConnell Directs DEA To Figure Out How To Distinguish Hemp From MarijuanaNext