The World Trade Organization and Cannabis 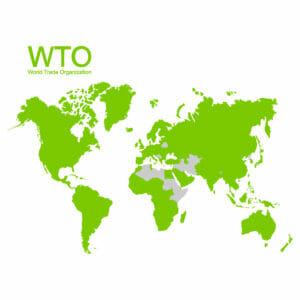 Last year, we helped a client take a hard look at an issue related to cannabis and the World Trade Organization (WTO). It was a fascinating project and WTO lawyers took preliminary interest in the issue. We were told that cannabis had not come before the WTO in any formal or informal context to that point, whether for market access or other issues. Moreover, there were no WTO working groups related to cannabis, no real reports, no recommendations and no “disciplines.” As far as we know, all of that is true today.

Briefly, the WTO is a multilateral organization governing trade among nations, based on obligations its member states undertake through various treaties. The WTO is the largest international economic organization in the world. It’s also kind of new, having formed via the the Marrakesh Agreement in 1994. According to that Agreement, the purpose of the WTO is “the substantial reduction of tariffs and other barriers to trade and… the elimination of discriminatory treatment in international trade relations.” The WTO administers a complex legal regime regulating international trade, and WTO member countries must abide by these rules. Otherwise, they can be dragged before WTO’s dispute settlement body (sued, basically).

When it comes to cannabis, it’s important to note that the WTO recently clarified (and even emphasized) in an Appellate Body Report that “illicit trade” is not exempt from WTO disciplines. This means that the WTO legal framework permits member countries to ban trade in products that are also prohibited domestically. However, if a WTO member legalizes a product domestically, its justifications for restricting international transactions might fail under WTO law. More and more countries are legalizing cannabis domestically, to various degrees.

Let’s look at a few examples of how this could work: one with respect to “market access” issues, and one on “national treatment”, the two primary categories of WTO dispute resolution.

The market access example for cannabis is based on a recent WTO dispute related to tobacco. Suppose Mexico finally gets its act together and puts the finishing touches on federal cannabis legalization in 2020. And suppose Mexican companies wish to export beautifully packaged cannabis chocolate to Canada (another country that has legalized cannabis federally). Canada tells Mexico it won’t accept the chocolate, because Canada has essentially adopted “plain packaging” regulations for cannabis based on public health concerns. Mexico could bring this issue to the WTO, challenging Canada’s “technical barriers to trade” and obstacles related to trademark registration. The WTO would parse these claims in the context of various treaties, including but not limited to TBT, TRIPS and probably even USMCA. That would be a fun dispute.

Next is the national treatment example. Let’s say a WTO member country with a CBD export economy, like Bulgaria, accused another WTO CBD country, like the U.S., of “unfair treatment as to a like product.” Bulgaria might argue that the U.S. is unlawfully supporting or subsidizing its CBD industry in some fashion. Or, it might argue that U.S. FDA governance as to CBD is merely a pretext for economic favoritism. These types of “vice product” disputes come up frequently before the WTO. Also fun.

It’s important to note that the WTO does not exist solely to resolve disputes. Sometimes the WTO takes on modernization projects when a new commodity emerges. Other times, it serves as a trade policy “think tank” of sorts: member states gather to hash out topics, recommend rules and explore new disciplines (just like in regional trade agreements). In general, though, the WTO is viewed as more reactive than proactive in most respects. When the organization does engage, a core philosophy seems to be that “markets should be open” and restraints on trade should be viewed skeptically.

When WTO finally picks up cannabis, it will look closely at relevant treaties joined by member states. Those treaties will include WTO agreements, such as TRIPS and TBT , regional trade agreements, and also treaties like the U.N. Single Convention on Narcotic Drugs. It will contend with health reports promulgated by the World Health Organization and other bodies, and defer to those treaties extensively. The role of WTO is not to recommend policy, after all. Instead, it examines what other authorities have produced, and it considers member state trade policies in light of those laws, reports and recommendations.

The WTO will engage the international cannabis trade somehow, some way, in the next few years. It will be fascinating to watch that ensue. In the meantime, for more on international law and cannabis, check out the following:

The post The World Trade Organization and Cannabis appeared first on Harris Bricken.